This area of my website contains a selection of recent writing and articles.

An experience of Equine Facilitated Learning 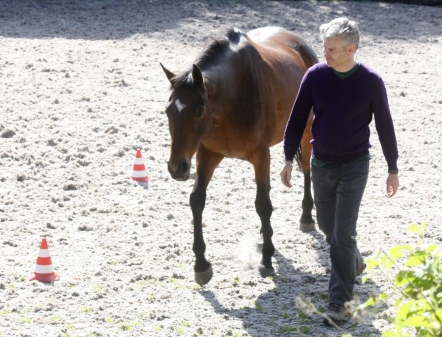 Last Wednesday I went up to the edge of Dartmoor with Sue Blagburn (www.adventureswithhorses.co.uk) and her horses to work on ideas for Equine Facilitated Learning (EFL) workshops. It was a cold January day with an already fading slate grey sky when Sue suggested that I went through some EFL exercises with her thoroughbred Arthur. Yet when William, the dominant New Forest gelding, angled passed Arthur and blocked the gate, he made it known that he wished to work with me instead.

I felt flattered when Sue explained the change of plan. How gratifying to be chosen by the lead horse. I wallowed in reflected glory, eager to prove myself and, once in the horse arena, anxious to do the right thing. I slipped on the head collar and attached a lead rope, and muttering some encouraging words – perhaps an involuntary prayer – I stepped tentatively forward. However behind me, William’s solid form stood firm.

This powerful animal was under no compulsion to do anything, yet I suppose I didn’t trust his munificence, his genuine impulse and curiosity in me – a puny creature of a different species. In looking to him for my sense of value, I suppose I'd sought to lead from an egoic desire to feel special. From a small spot of feigned assurance, I had set off urging William to follow, but with no clear sense of myself, or what might link me to this horse. By repeatedly switching my attention from my own intention to reassurance that the horse was still with me, I teetered on a precipitous edge.

William had a lot to teach me. As I stood by ineffectually, he came up close, extending his pliable upper lip to delicately nibble the fence wire, to catch my cuff, to caress my hand. It was as though, by demonstrating these fine motor skills, he intended to communicate his sensitivity. It was humbling to accept that, by these subtle movements, this large animal might be alerting me to something precious.

As a psychotherapist, I’m used to working through my body to detect shifts in the interpersonal space between a client and me. Through training I’ve learned to notice subtle changes in the field and, like a conceited concert pianist, I am admittedly proud of this acute sensitivity. However it's a trick I've only ever managed with humans.

Process oriented psychologist, Arnold Mindell borrows a metaphor from the electromagnetic spectrum to describe the notion different ‘channels' of awareness. The electromagnetic field around a horse’s heart has a five-metre radius. My challenge then was to learn to tune in and pick up a new signal on an unfamiliar channel.

Instead of being anxious of a likely breach in separation, I needed to build and trust in my relationship with William. I rubbed my fingers into the matted hair of the horse’s neck then stood with an open hand on the broad muscles of his shoulder, listening. It's then I felt something, sensing something in my diaphragm. A resonance. I stepped forward and William came with me, horse and human falling into step.

It felt extraordinary to be connected and I experienced the giddying tilt of revelatory knowledge. Striding out with an undefended heart, it wasn't like I was ‘leading’ William rather in confidently attending to where I was going, I able to accept the connection that already existed between us. Instead of needing to assert myself, it seemed I needed to be willing to receive what William had already offered me.

It began to snow and we picked up the pace. We danced into swarming snowflakes as they poured from the darkening sky. I felt profoundly moved.

In rediscovering the bond between us, I remembered the part of me that was horse. We were already connected, but I’d blindly assumed we were separate. It was an experience I'd describe as like dipping a hand into the pocket of a favourite overcoat and finding material proof of a half-remembered dream.

For more information on ecopsychology call Peter on 01392 966845 or contact Sue Blagburn at www.adventureswithhorses.co.uk.